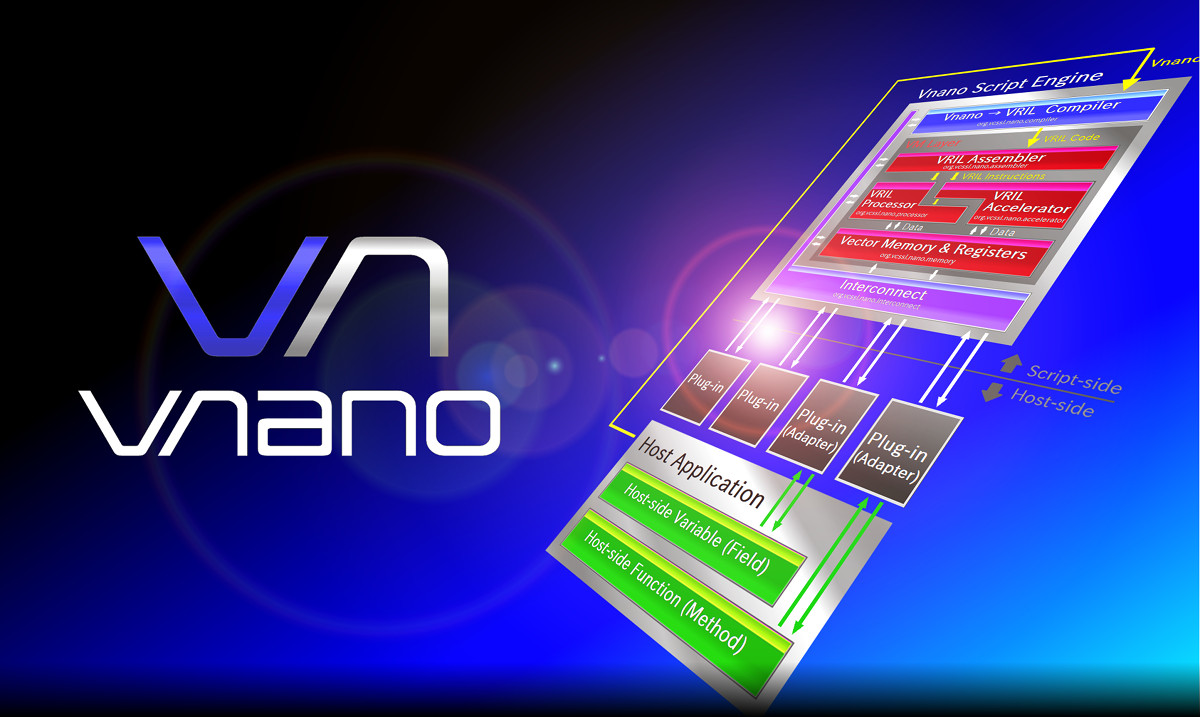 Here is the official website of the script engine/language "Vnano".

| What is the Vnano ? | How to Use | Tutorial Guide | Engine Specifications | Standard Plug-ins | Code Written in the Vnano |

The Vnano (VCSSL nano) is a compact and high-speed scripting engine/language. The engine is embeddable in Java applications, so you can implement scripting feature on you apps easily.

» An Example of the Application Using Vnano: RINPn (Scientific Calculator)

You also can execute Vnano scripts on your PC by introducing the runtime environment.

Features of Vnano are not rich because it places importance on embeddability, but its operating speed is very high, so it may be useful for calculation purposes and so on.

- Example of a script written in the Vnano -
ExampleScript1.java
» More Details: Features of the Vnano as a Language

Tne scripting engine of the Vnano is an open source software, and released under the MIT license.

You can try using the Vnano in few minutes. Let's try!

At first, download the pre-built package of the Vnano by clicking the following button, and extract the downloaded ZIP file. In the extracted folder, a JAR file "Vnano.jar" exists. It is the scripting engine of the Vnano (Vnano Engine).

Also, if you only want to execute Vnano scripts (like as other scripting language) without embedding the engine in any apps, introduce the VCSSL Runtime instead of the above.

In the extracted folder, an example script file "ExampleScript1.vnano" written in the Vnano is bundled:

The above script calculates the sum of integers from 1 to 100. To execute the above script, "cd" to the extracted folder on the command-line terminal, and input the following command:

Also, if the VCSSL Runtime has been introduced in your PC, you can run the above script easily, by launching the runtime and choosing the script (also can execute by the command-line if you did the path setting).

Then the calculated value will be output:

In the extracted folder, an example code of a Java application using Vnano "ExampleApp1.java" is bundled:

Note that separator-characters ( ; or : ) of class-paths are different between the above two commands.
The result is：

As the above, we successfully compute the value of "1.2 + 3.4" on the scripting engine.

For more detailed explanation of how to use the Vnano, see the following page:

» More Details: How to Use the Vnano

Code Written in the Vnano

Some official code written in the Vnano are distributed on the VCSSL Code Archive. They might be useful as example code of the Vnano, contents for software equipped with the Vnano, and so on.

Updated the Scientific Calculator "RINPn": Added a Retractable Key-Panel, etc.
2022/11/11 - We have updated the scientific calculator app &qutoRINPn" to Ver.0.9.4. Explains the details of the changes by this update.

Updated Applications
2022/10/12 - We have released the new versions of some applications. Explains the changes by this updates.